Pauktuutit has a vision of an Inuit Early Learning and Childcare (ELCC) system that gives every Inuk child the best possible start to life and every Inuk woman the opportunities to excel in their chosen paths. Inuit children and families wish to be healthy, happy and safe and to have the opportunity to learn and speak Inuktitut, to grow up prepared to live a harmonious life rooted in Inuit ways of knowing and equipped to participate in the broader Canadian society.

Pauktuutit has engaged Inuit Tapiriit Kanatami (ITK), Inuit childcare providers, researchers and stakeholders to develop a gendered perspective on Inuit early learning and childcare services. Pauktuutit developed an engagement session report which was given to ITK and the federal government to inform a National Indigenous Early Learning and Childcare Framework. You can read our session report below.

As the national Inuit women’s association, Pauktuutit is committed to bringing forward the voices, experiences and priorities of Inuit women in the development of this Framework.

Pauktuutit Inuit Women of Canada began using gender-based analysis in 2006, to understand both similar and different effects of policies and programs on Inuit women and men. The organization developed an Inuit-specific approach that considers the effects of culture and history on the experiences of men and women.

“Inuit specific culturally relevant GBA is a way of gathering and using information about the different needs and social experiences of Inuit women, girls, men and boys in a way that reflects the unique characteristics of Inuit culture and society.” (Inuit Gender Based Analysis Framework: A Culturally Relevant GBA in an Inuit Context powerpoint, 2012)

Inuit identity, through colonization, has been disrupted and undermined through policies and practices that did not respect Inuit ways of being and knowing. This includes the way children need to be raised and what they need to learn in order to feel connected to their Inuit identity, their families, their community and their culture. Any early childhood learning and education framework for Inuit needs to be a conscious agent for restoration of Inuit culture and Identity. If it is not it will become a system that reinforces the colonization relationship with Canada. 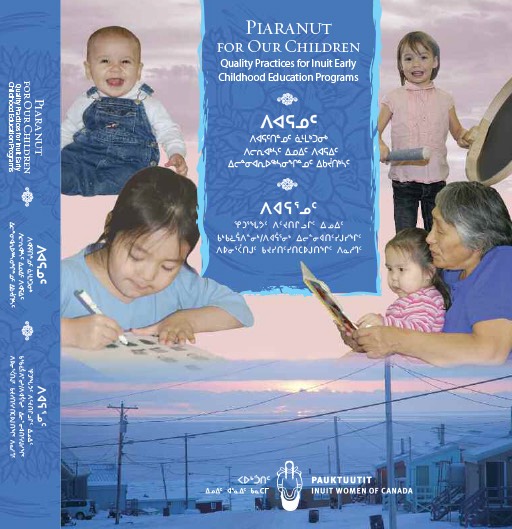